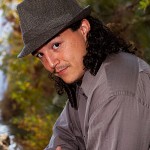 Neil is an only child raised by a single mother in Spokane. He is engaged to be married to the mother of his four children; three boys and one girl. Neil belongs to Mt. Olive Baptist Church in East Central Spokane where he is a member of the choir and the kitchen crew. Neil has a great passion for all forms 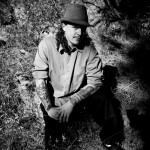 of art, primarily music and tattoos. He writes, records and perfumes his very own unique brand of music from his home and is earning his business degree in marketing. He says he definitely plans to add many more tattoos (now totaling fourteen) to his body before he’s done.

“The only way to explain why I have so many tattoos is simple, I just love it! I can express exactly who I am without even saying a word, I think it’s very cool.” 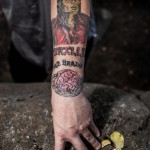 Michael Jackson Zombie: The most successful long, music video, album and artist in the history of mankind! Period! Isn’t the ‘King of Pop’ every musician’s hero? Every time I see this tattoo it inspires me to be different and to settle for nothing less then the best I can possibly do.

‘Eat Brains’: The catch phrase of my music company Crown Throne Records. In my music I try to promote the power of imagination and possibilities. Food for thought. Turn it around and my interest i American horror films gives us thought for food… ‘Eat Brains’

Ninja: In life and in my music I love surprises. Similar to the ninja, my mission requires great skills to ensure that my unpredictability remains undetected until the perfect moment arises and I can strike with grease and precision. Ninja style. 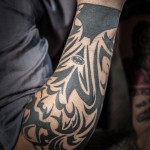 Batman Infused Tribal: Like Michael Jackson, Batman is just simply the best. With realistic motives and resources, Batman has no supernatural powers and a moral code that any father can trust his sons to live by. As a father I am always collecting role models, Batman is one that even I still look up to! So I mixed my here in with some expansive tattoo tradition and came up with this partial sleeve that I plan to take up to my neck in the future. 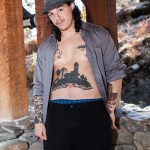 Riverfront Park: With much pride (and pain!) I can be the home town boy everywhere I go. I’ve traveled the United States quite a bit and there is no place like home. Spokane is not perfect and neither am I, but in so many ways I feel like were meant for each other. There’s no place on earth I’d rather be that here in the lilac city.