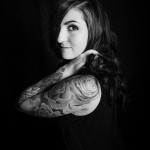 My name is Shannon Burnham and I am 29 years young (and I will stay 29 for the next 60 years!). I have spent the past 11 years as an Airfield Management Operations Supervisor in the United States Air Force. I grew up in Rockford, Illinois alongside my sisters Susie and Chelsea, and my brother, Michael. Fortunately, I grew up in a household with parents that devoted everything they had to shaping us into 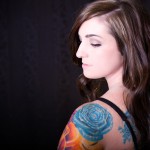 who we are today. I have never met such loving, supportive, hard-working people.

Life, for me, has been one adventure after another. I had plans to go to college right after high school, but something drew my attention to the military. One by one, I made my way through each of the service’s recruiter offices. The last recruiter I spoke with was Staff Sergeant Blackdeer. Obviously, he is an incredible recruiter, because he had me convinced that the Air Force 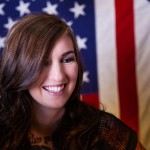 was my calling within the first five minutes of our conversation. Later that night, I broke the news to my parents and they reluctantly signed the enlistment contract, because I was only 17. Shortly following my entry into the Delayed Enlistment Program, three commercial airliners were hijacked by terrorists and flown into each of the World Trade Center buildings and the Pentagon. I remember that day vividly. I was in class when our teachers escorted us to the cafeteria 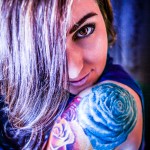 and we watched the news footage of the aircraft crashing into the buildings. From that point forward, I felt as though the military was my calling. During the past 11 years, I have lived in Texas, Arizona, Florida, Mississippi, North Dakota, Idaho, and have been deployed three times to Southwest Asia. The longer I spend in the Air Force, the more I realize that this is where I am meant to be. I am currently going to school to earn my Bachelor’s in Fire Science. My next big goal is to get my commercial helicopter license and fly for a wild land firefighting company. 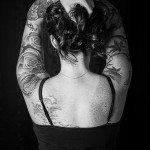 The Air Force moved me to Idaho three years ago. It was here that I met my husband, Seth. We have been married for two years now and he took it upon himself to accept my son Jaxson as his own. Jaxson is eight years old and before long, this “little” boy will be taller than me! Seth and Jaxson are my world. They are the reason I wake up each morning and work as hard as I can.

When we are not at work, Seth and I enjoy riding our motorcycles (he’s a Harley guy that fell in love with a sport bike girl!) Some of my favorite hobbies include reading, crafts, playing with our three 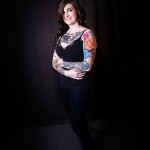 dogs, gardening, and getting tattoos. I got my very first tattoo when I was 18. It is a 1” Kanji at the bottom of my spine that translates to “loyalty”. I got this because I had just started my journey in the military, and seeing how loyal and dedicated my comrades were was extremely inspiring. I kept telling myself that I wasn’t going to get any more, that the Kanji was enough. I lasted almost five years with that outlook. Now, 11 years later, I have a total of 11 tattoos. Most of them surround my love of family and life’s beautiful journey. In 2008, my parents came to visit me in Arizona. We went into one of the local tattoo shops and I found beautiful flowers in a book. They reminded me of all the flowers my mom planted when I was little. Our entire back yard had flowers everywhere, so that tattoo was sort of a tribute to my parents. After that piece was done, I took another break until 2010. During that year, a long 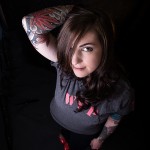 relationship had come to an end. It was one of the darker periods in my life and I struggled for quite a while because I felt like I had no idea who I was as a person. I still had some growing to do. I decided to get my back tattooed with lotus flowers and water. Lotus flowers are unique because they start growing in the mud on a lake floor. As they mature, they make their way through the murky water and bloom on the surface. To me, I was a lotus flower. It was unclear who I was as a person until I broke out of that relationship.

After I finished my back piece, I told myself I was done with tattoos. I had no desire to ever get my arms tattooed. Then I started thinking of a way to honor Jaxson. There were so many possibilities…I could get his name, his handprints, his portrait. I didn’t want something that common to represent him. I decided to get his birth flower, roses, on my left upper arm. What better a place than my sleeve? I chose roses because I would always know in my heart what they meant. When people look at them, they would just see flowers. But when I look at them, I see my beautiful son, Jaxson.